Sorry about my lateness in reporting my full day in Akumal.  It started out pretty cloudy on my morning walk on the beach. 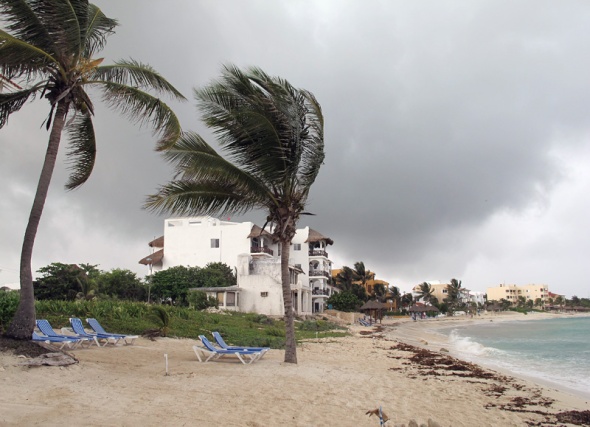 Here’s a fixer-upper right in the middle of Half Moon Bay.  It has potential.  I wouldn’t turn it down if someone gave it to me. 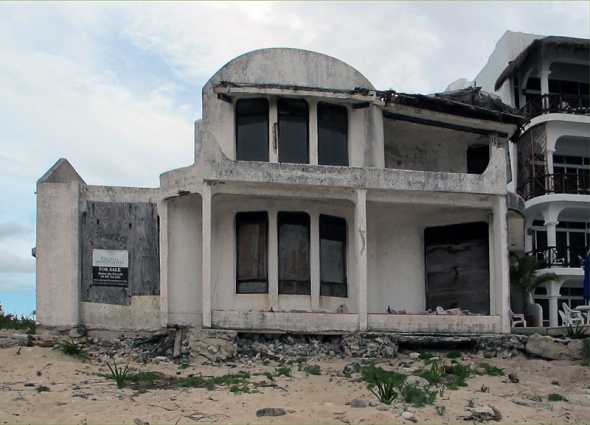 As I walked, it got cloudier… 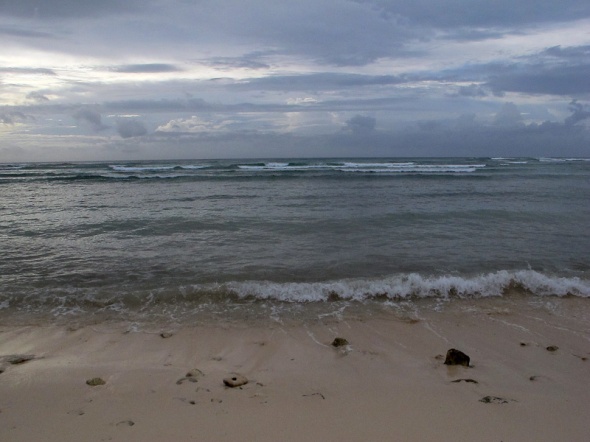 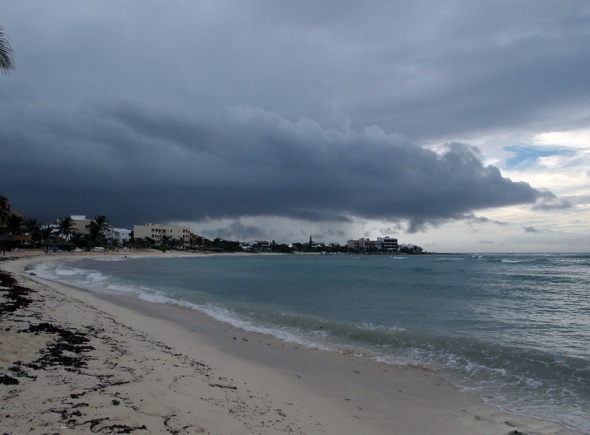 …as Hurricane Ernesto made his approach.  It poured for about 15 minutes and I thought that was going to be it, but it stopped and some blue sky came out so I thought we had been given a reprieve.  I grabbed my bike and pedaled into town with camera in hand hoping the worst had passed.  I got into town long enough to take a few pictures.  Aren’t these flowers pretty? 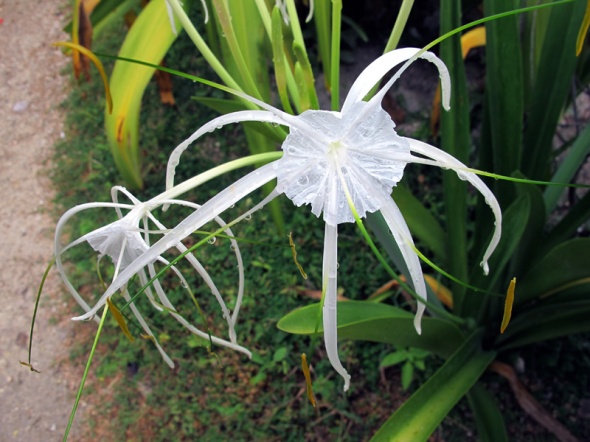 I grabbed a quick lunch of fish tacos at La Cueva del Pescador.  They were very good… 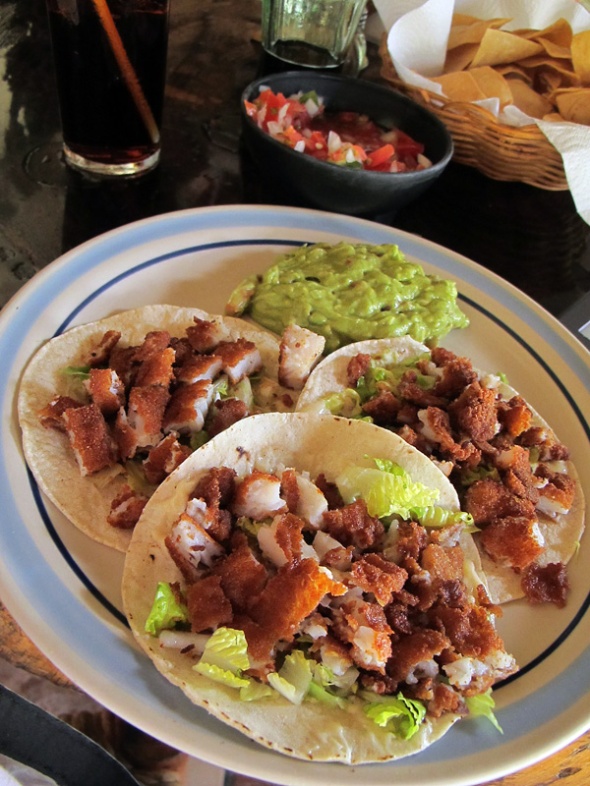 Then I went for a walk along Akumal Bay.  They were bringing boats in in preparation for the storm. 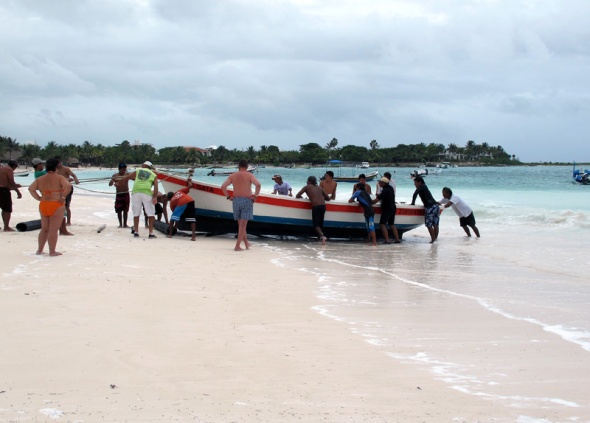 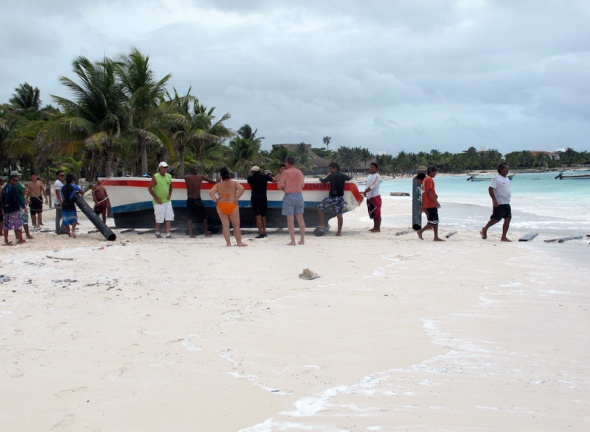 Definitely not a one-person job.  I think the woman in the orange bikini must have been supervising.  (Or not…ha!) 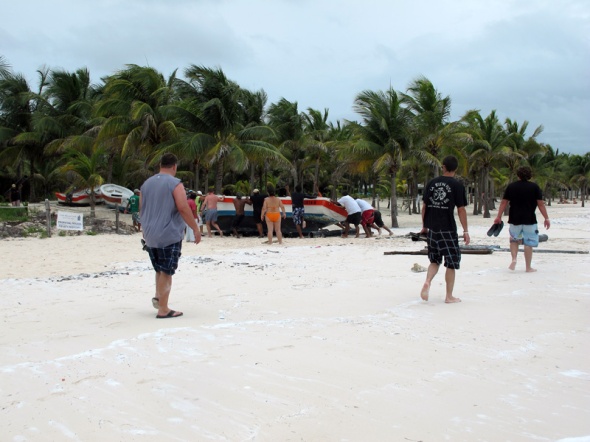 Here’s the last picture taken by my Canon G12.  (HEAVY SIGH)  See the big waves and sea spray?  That was just the beginning.  As the clouds began to reform, I headed back to the bike to pedal home only to have my camera and me drenched by the torrential downfall along the way.  I survived…my camera didn’t. 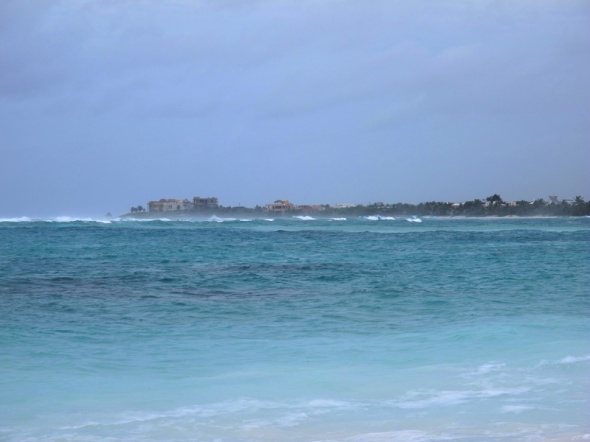 So, now…the question of the day.  What did I think of my trip?  Hmmm…it wasn’t my best.  Like I’ve said before, it was too disjointed and I did too much jumping around.  As a result, I never felt a connection with any of my destinations.  I’ve learned that you need to stay in one place for a matter of days before you can feel comfortable and at home there.  I’ll go through my stops one by one.

Puerto Morelos:  I’ve been here a couple of times before and already knew there’s not that much to do and didn’t want to spend much time there.  But it’s a convenient short stop from the airport..  The hotel I chose was okay, but I wouldn’t want to spend a long time there. There were some negative changes to the town this time, so I didn’t even entertain the thought of staying there longer.

Playa del Carmen:  Like I said on my post the night I stayed there, I’m not a PDC kind of gal because it’s too commercial and glitzy.  But I absolutely loved the hotel I stayed at there.  The Hotel Lunata was really comfortable and cozy.  The bed was soft, it had a very Mexican feel and I could have comfortably stayed there for a year or two…seriously. I did not want to leave. 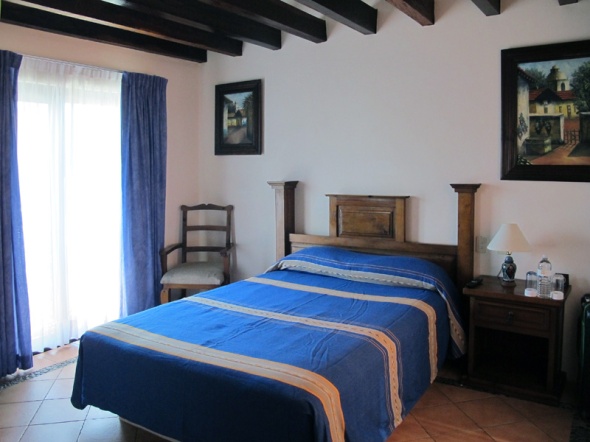 Tulum:  I would never stay at the Secret Garden again…it was almost oppressive with a closed-in feeling and lack of sunlight.  I was disappointed in the town because it was right on the highway and didn’t really have the charm or history that the towns more inland have to offer.  The restaurant prices were much higher than I thought they were going to be and they just weren’t that great.  Getting to the beach involves cab fares and the beach area is confusing to someone who is not staying on the beach.  Since the town is so separate from the beach area, it’s just an inconvenience if you’re staying in one place and want to get to the other.

Akumal:  This was probably the most disappointing place I stayed on this trip.  I’ve been briefly through it twice before but have never stayed overnight here.  Both previous times, I wasn’t impressed, but when I was deciding where to go after Tulum on this trip, I thought maybe I hadn’t given Akumal enough attention.  It turns out I had.  There just isn’t that much to do in Akumal.  There is a small town area where there are some souvenir shops, a convenience store and some restaurants.  It takes no more than about 15 minutes to see all of this.  The restaurants are very pricey and are just okay…nothing over the top.  There are little convenience stores along the road to all the condos and homes along the coast which are very expensive and don’t offer much of a variety.  After being there for a few days, I learned that it’s a place where families and/or couples go for some quiet time.  This definitely isn’t a party town or a place where people going solo can meet other solo travelers.  I felt kind of isolated here and that wasn’t because of Hurricane Ernesto.  I would never go back to Akumal on my own.  And if I DID go back, it would only be with a family member or someone I wanted to spend some quiet, close time with.  Even then, I would probably opt for another Mexican location.  It’s just kind of boring after one day if you’re looking for other things to do.  I would definitely recommend that you rent a car if you stay here so that you can go to other locations like Playa del Carmen, Tulum, Coba, Puerto Aventuras, Xcaret, etc.  They offer water activities like scuba diving, snorkeling, etc., so if you’re not into these, Akumal doesn’t offer much other than relaxation.  One big thing I didn’t like about Half Moon Bay is that the beach is nothing but dead coral.  It is difficult to swim in this bay because the sea floor is covered with the coral so you can’t get any kind of footing.  It’s best if you have some water shoes because you don’t know what you’re stepping on out there.  I waded out once and had a hard time coming back on to the beach because the coral was slippery and I couldn’t stand up.  Akumal Bay is much better and more swimmer-friendly, but if you’re staying at Half Moon Bay, you have to commute to Akumal Bay.

Highlights of the trip were definitely my trek to the top of the ruins at Coba and the sea turtle release in Akumal.  These made up for all the downsides of the other events.  I won’t be going back to these locations in the near future, but I’m still glad I went.  Now it’s just on to the next adventures.

This entry was posted on September 2, 2012 by EditorDeb. It was filed under Uncategorized . 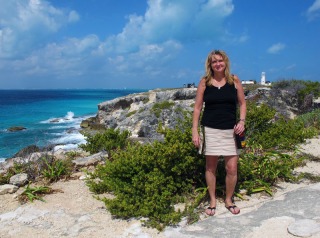 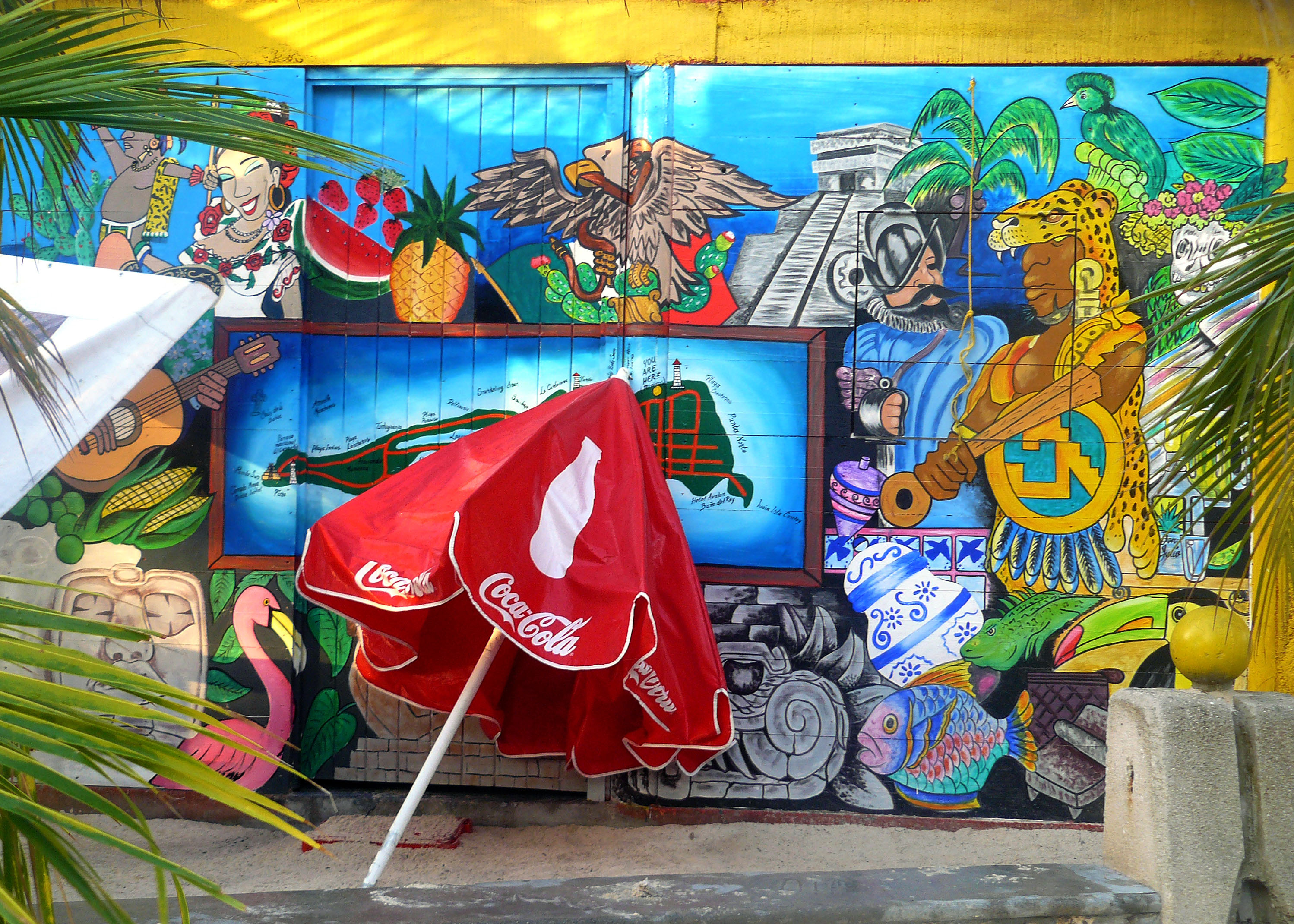 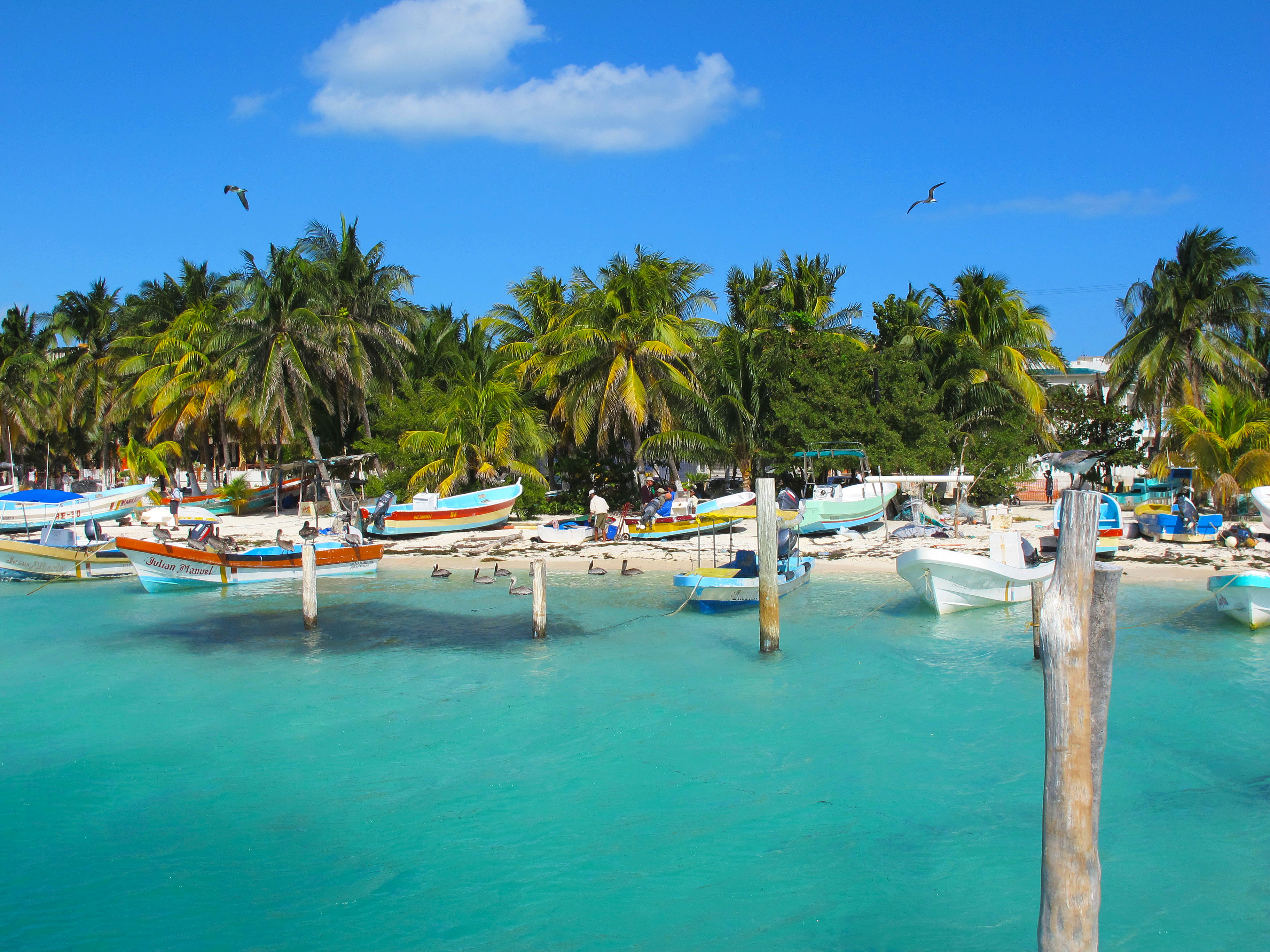 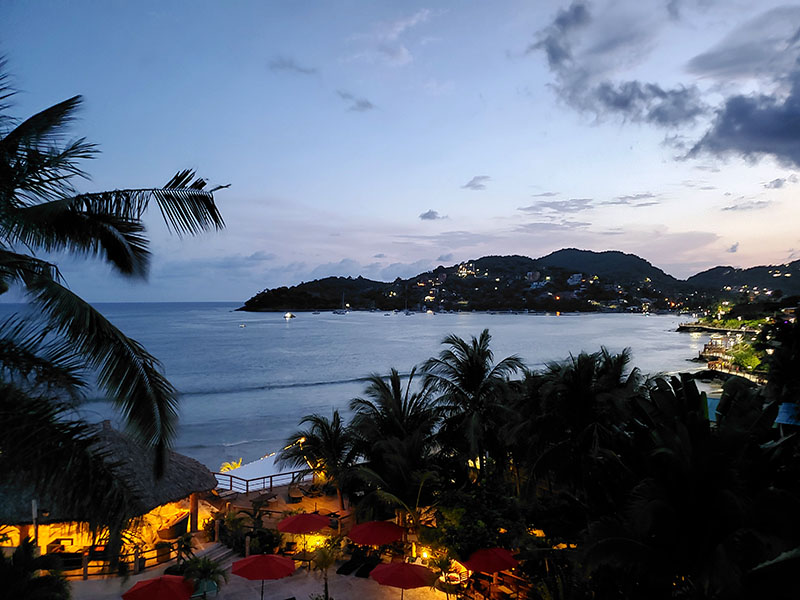 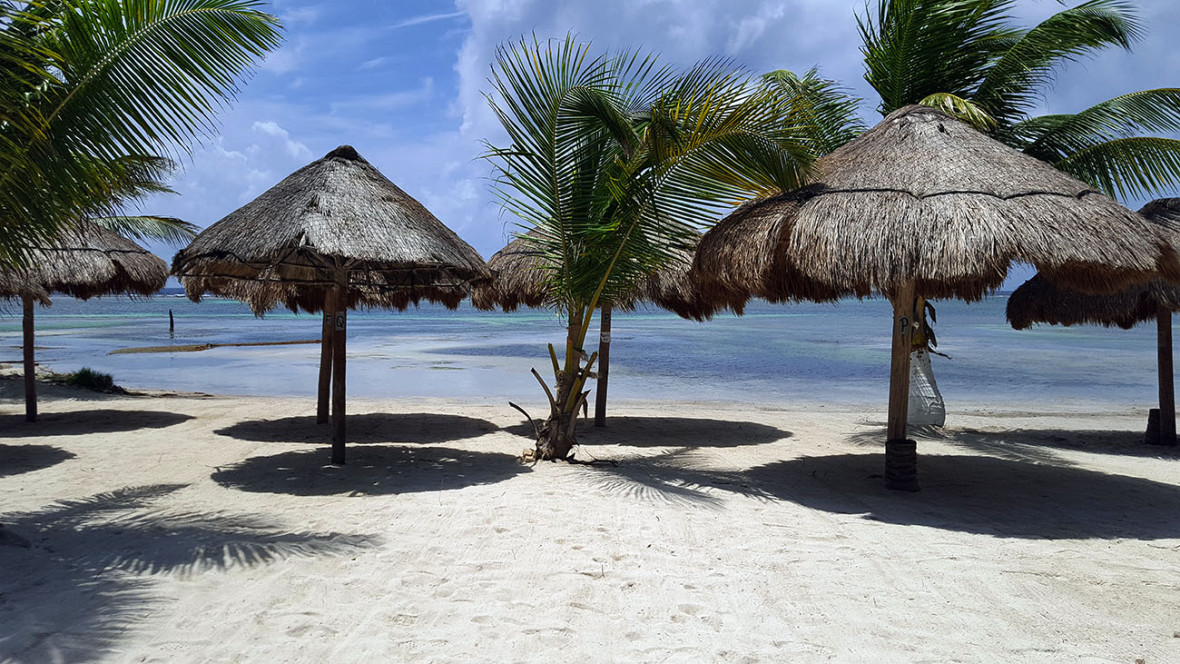 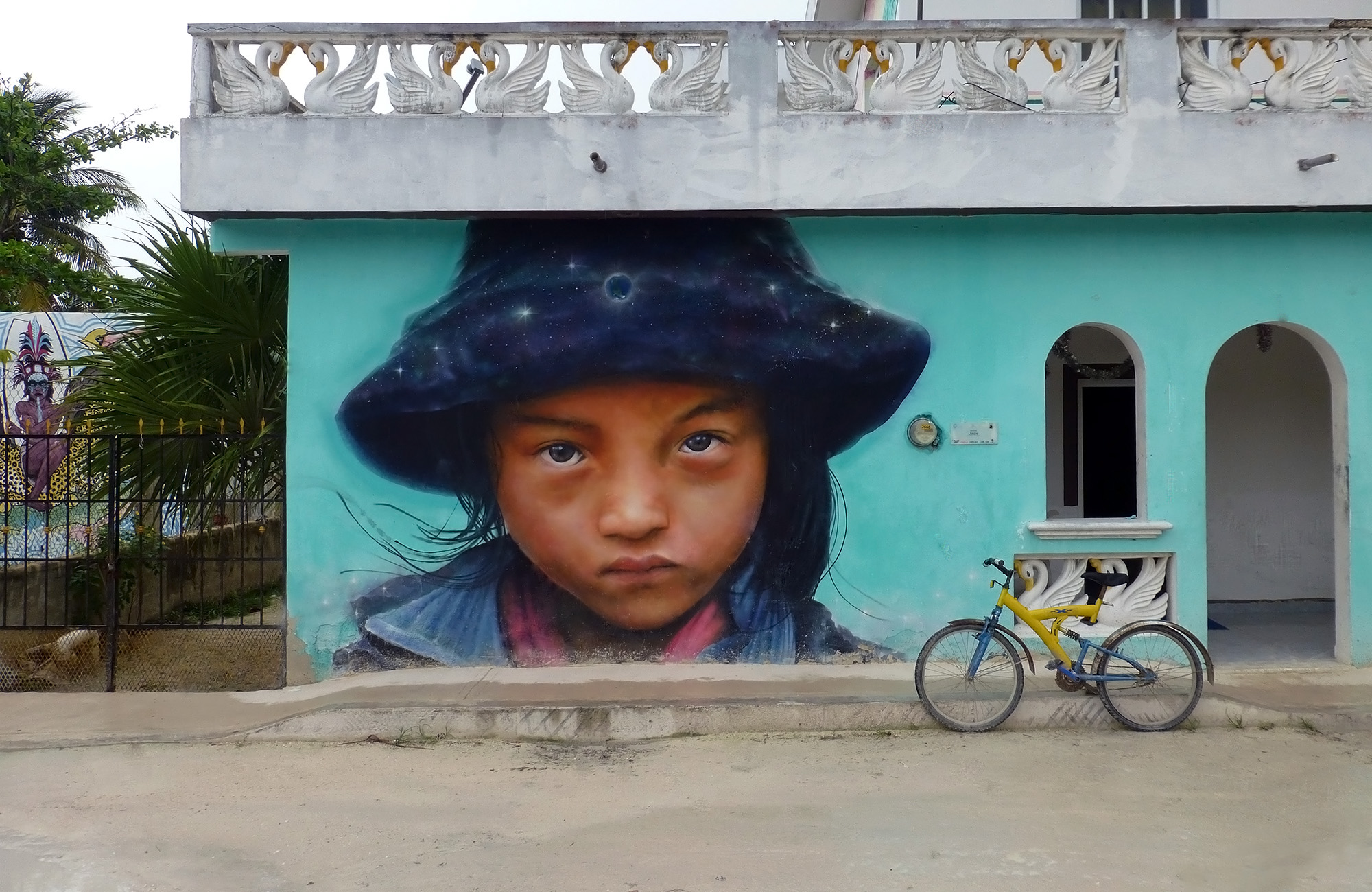 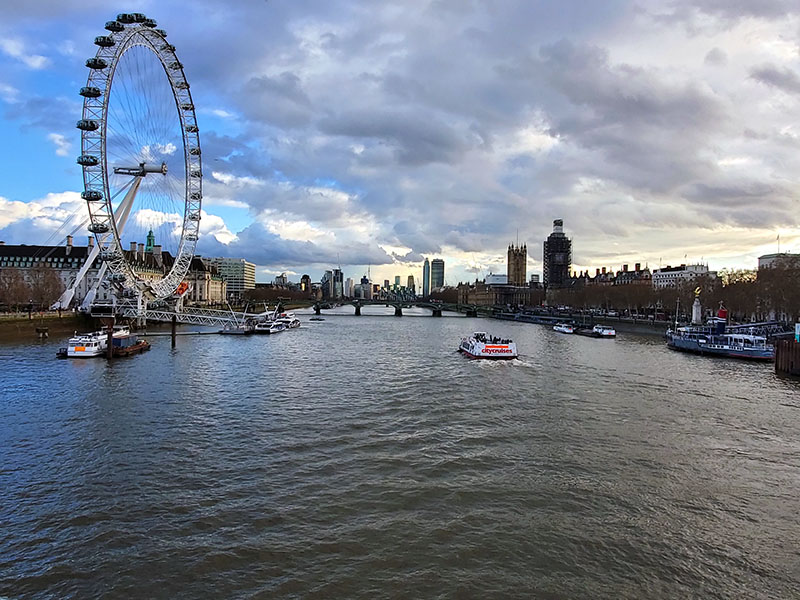 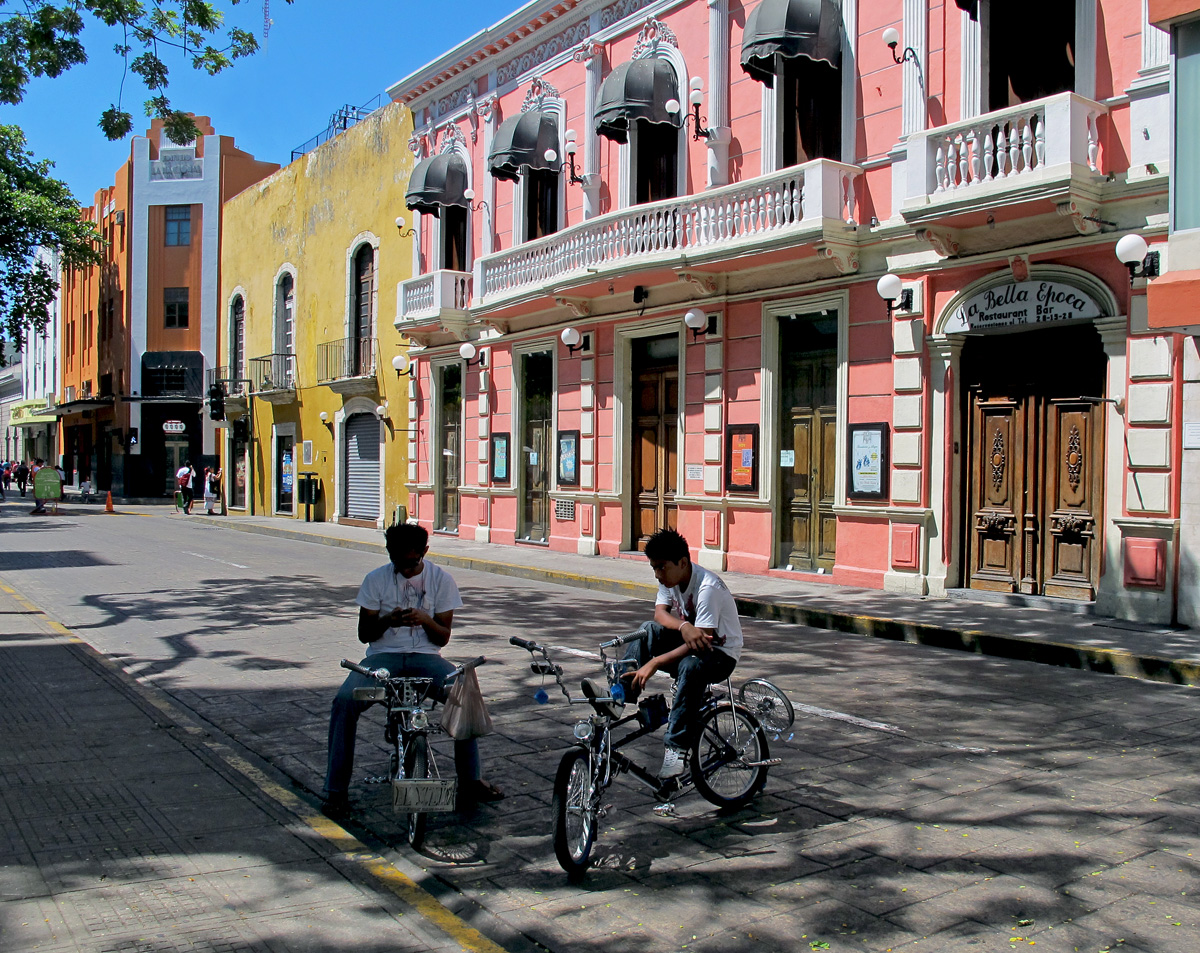